Optoma unveiled the UHL55 at CEDIA 2018 earlier this month. The projector follows in the footsteps of their first smart projector, the Optoma UHD51A, with its Alexa Voice Control function integrated into the projector itself. The Optoma UHL55, also 4K, has a unique, compact design that makes it a great addition for smaller spaces, and a great conversation piece due to its shape and style of the chassis. 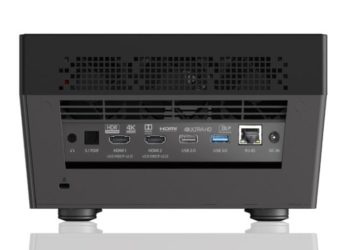 The Optoma UHL55 is a $1,599, 4K UHD projector with built-in smarts – but more on that in the Special Features section. With a claim of 1,500 lumens, this isn’t a projector for your bright room, but has enough brightness to deal with some modest to moderate ambient light. It will do well in a dedicated home theater or cave, or in media rooms and living rooms where there is at least some control over ambient light. My own living room is pretty bright, and I installed blackout curtains so that I could review business and education projectors during the day.

These curtains have proven their worth time and time again with business and education projectors, and when I got my own home theater projector. When I got my Epson Home Cinema 5040UB (which, when calibrated, has 1,115 lumens in Bright Cinema Mode), though the projector can deal with some ambient light on all but the darkest scenes, the projector is really meant for more of a dedicated home theater than a living room – and those curtains have come in really handy. Moral of the story? If you find that the 1,500 lumens isn’t enough for your ambient light conditions, there are always workarounds.

The Optoma UHL55 is a single chip DLP projector with an RGBB LED light engine that boasts a lifetime of 20,000 to 30,000 hours. That’ll give you about a decade or so of viewing, but you’ll be replacing your UHL55 with an 8K projector far before that light engine goes out. The projector has a high contrast ratio of 250,000:1, but we tend to judge projectors on their black level performance rather than go by these manufacturer claims. At just 8.6” in length and width, 5.3” tall, and 8.7 pounds, the Optoma UHL55 is a compact projector that can be taken outside for a movie night, moved from room to room, or used in relatively tight spaces.

The Optoma UHL55 has a host of special features that make the projector one of the smartest around, perhaps with the exception of the recently reviewed LG HU80KA (though that is about twice the price). The UHL55 has an android operating system with a 4K UHD media player, smart TV apps (like Netflix and Amazon Prime Video, I’m assuming), as well as downloadable content from the Optoma Marketplace App Store.

This, coupled with its ability to take voice commands from Google Assistant, reminds me of the NVIDIA Shield I have here waiting to be reviewed. That’s just a little streaming player and game console – that Optoma integrated the same types of smarts into this projector is quite awesome. When the Optoma UHD51A came out – the first of its kind from Optoma – it did not have integrated smart TV apps, or the Optoma Marketplace App Store, and could only work with Alexa, so this is a definite improvement.

Speaking of Alexa – voice control is available for her, too. There seems to be some improvement on her abilities on this projector versus the UHD51A. In addition to being able to turn the projector on or off and adjusting volume, you can now use Alexa to pause your content, switch inputs and color modes, and playback with the USB Media Player. Perhaps, as time goes on, we’ll be able to do even more using our Alexa personal assistant. For now, this’ll do.

The Optoma UHL55 has two options for audio. The first of which is the built-in, 8-watt stereo speakers, with Dolby Digital Decoder for compression. The second is Bluetooth audio, for which you can do an audio input or output. This is super awesome for those of you who have a Bluetooth soundbar or wireless surround sound speakers with Bluetooth technology. Though the 8-watt speakers should be plenty loud enough, we always recommend getting a nice set of external speakers, as on-board speakers are generally lacking in any real bass.

As mentioned, the UHL55 is a 4K UHD projector – what I have not mentioned yet is that it has four HDR10 picture modes! This gives a lot to choose from for adding the pop-and-wow factor characteristic of HDR. It has the BT.2020 expanded color space, Dynamic Black, UltraDetail, PureColor and PureMotion (CFI) technolgies. The Optoma also has auto focus and auto keystone, both of which are great features if you’re planning on moving the projector around. Even if you’re not, they sure make your initial setup an easy experience!

The Optoma UHL55 has a simple back panel for the inputs and connectors. It features an audio jack, a S/PDIF input (Sony/Philips Digital Interface), two HDMIs, a USB 2.0 and 3.0, the standard RJ-45 connector for Local Area Networking, and a DC In port. The control panel is on the top, positioned in a straight line at the front edge of the projector, and consists of only a power switch, a focus button, volume buttons, and a button for connecting Bluetooth audio sources.

Overall, the Optoma UHL55 seems to be a great new addition to the Optoma line of 4K UHD projectors. It appears to be a definite improvement over the UHD51A, though we won’t be able to officially comment on that until we get one of these in for review – hopefully, the UHL55 makes the cut and ends up in our queue. If we do get it in for review, we’ll be able to assess its picture quality and performance in detail. Until then, we can assume it’ll be similar to the Optoma UHD51A, which we reviewed earlier this year.