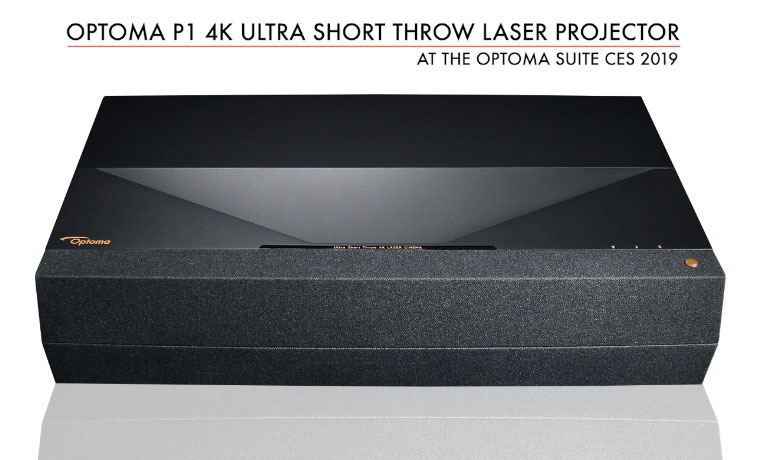 The Optoma P1 Smart 4K UHD Laser Cinema is an ultra short throw projector with smarts. This 3,000 lumen projector is intended for living rooms and family rooms in addition to dedicated home theaters, as Optoma aims to take 4K out of the home theater and “put it everywhere,” according to Jon Grodem from Optoma, who we met with this year at CES 2019 to discuss their newest projector. The Optoma P1, however, is more than just a projector – it’s a home entertainment system.

The P1 comes equipped with an integrated soundbar by NuForce, which features individual woofers, aluminum full-range drivers and isolated speaker enclosures for robust sound – much higher quality than what you can expect from any standard built-in speakers. Much like the Optoma UHD51A, the P1 has Amazon Alexa and the Google Assistant built in, only we can expect their function to be higher than what we saw with the UHD51A at last year’s CEDIA, as Optoma has since made many improvements.

In this video, the Optoma P1 is being projected on a 100” ambient light rejecting screen, and the room is not fully darkened. The projector is capable of producing an image of up to 120” diagonally. The Optoma P1 was unveiled at CES 2019 and is expected to ship in Q2 of this year. Enjoy the video!

This video was created as an inside look into CES 2019, featuring Jon Grodem from Optoma. It was shot by Art Feierman, featuring the man himself, and edited by Nikki Kahl.