The ViewSonic M1 is a stylish pocket gaming projector featuring dual 3.0 watt Harman Kardon speakers for impressive audio on-the-go. This single-chip DLP projector operates with an LED light source for an outstanding lamp-life of 30,000 hours. ViewSonic claims 250 lumens when plugged in, and a battery life of between four and six hours depending on usage.

The M1 utilizes WVGA resolution (854 x 480) and has a fixed focal length, which is typical among pocket projectors. This is the only pocket or ultra-portable projector currently offered by ViewSonic, and for a list price of $337, it’s pretty good! While this projector is compatible with 1080p, it’s important to remember that this is not an HD projector, but rather, one that sports the same resolution as DVD.

The ViewSonic M1 has many uses with its capable onboard file browser and media player. It offers 16GB of internal storage, as well as HDMI, USB-A, USB-C, and will even accept MicroSD cards. This is a home entertainment projector, intended for the casual gamer, for watching movies, sports, streaming video and sharing photos, but can also be used in small conference rooms for business applications. The built-in stand and 360 degree projection lends to its versatility and portability. This projector is currently the least-bright offered by ViewSonic, but is still a lot of fun in a dark room and in the evening hours. 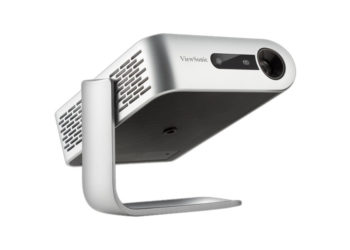 The ViewSonic M1 is a small pocket projector that weighs just 1.5 lbs, and measures only 1.6 inches high, 5.8 inches wide and 5 inches deep. It looks just like a portable speaker and can easily be tucked into a gaming console’s carrying case or laptop bag, and comes with a protective case of its own.

Some would refer to the M1 as a Pico projector, but we usually think of “Pico” projectors as the “super-small, literally fit-in-your-pocket” type projectors, weighing in at less than a pound.  Unless you are still wearing cargo pants (I guess they’re making a comeback?) you’re not going to fit many of the so-called “pocket” projectors in your actual pocket. We tend to think of “pocket” projectors as a step between the teensy-weensy picos and the approximately 5lb portable projectors.

While the ViewSonic M1 is intended for home entertainment, its portability and sleek design may make it attractive to someone who needs to make their presentations on the go; and the size makes it that much smaller when packing for business trips – a definite plus for “road warriors” who travel for their presentations. You will find examples of this projector’s text and presentation quality later in the review, as well as comments on video and audio quality.

This unit is a fun choice for LAN parties (do kids still do that?) or for those just getting into projectors, looking for a larger screen in their dorm room or living room, but don’t want to make the dive into an actual home theater projector or more expensive home entertainment projector just yet.

This ViewSonic boast a pair of 3.0 watt Harman Kardon speakers for impressive, room-filling sound. Short of needing to fill a large hall with audio, which you shouldn’t be using a 250 lumen rated projector for anyway, you will not need external speakers. If you do find yourself needing to hook-up external speakers, there is an Audio Out mini-jack for that!

While I expect most folks using such a projector would be simply projecting on a wall or ceiling, there are some good screens available on the market that are quite portable. In fact, all the photos in this review featuring images projected by the ViewSonic M1 were done so on the On-The-Go Screens Go-90 90 inch portable screen, which retails for less than $100, and can either be wall mounted or stand on its own tripod.

The ViewSonic M1 is a DLP projector with an LED light source, offering a life of 30,000 hours, and a contrast ratio of 12,000:1. There is a built-in file browser and media player, and 16GB of onboard storage. There are inputs for HDMI devices, USB storage devices, USB-C support for smart devices, and a MicroSD card reader built in. In other words, there is plenty of storage and connections for just about any media one would expect to play back on such a unit.