The Epson Home Cinema 2100 and Home Cinema 2150 are two new projectors that replace their venerable HC2040 and HC2045. Those older models have most likely been the most-popular projectors offered by Epson for home entertainment/entry level home theater, and have been top sellers, overall.

I was sent the Home Cinema 2150 for review, and have had the pleasure of testing all sorts of content on it – films, TV shows, and video games.

Whether playing from a Blu-ray disk or streaming from my PlayStation 4 or NVIDIA SHIELD, I was blown away by the performance of the Epson Home Cinema 2150 for the price. The older models may have been extremely successful, but this year, Epson is offering far more performance and features, at the same price point. Let’s get started then, shall we? 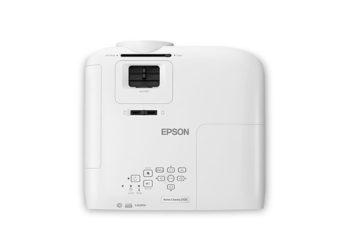 If you don’t care about Miracast or possibly-slightly-better black level performance (more on that later), you can save the $50 and go with the Home Cinema 2100. Now, since I was sent the Home Cinema 2150, I’m going to focus on that projector, with light commentary about the HC2100 where applicable.

I loved this projector! As a reviewer, I try to refrain from such emphatic phrases of approval, but in this case, it’s true. The Home Cinema 2150 is an awesome home entertainment projector, with extras that sub-$1000 projectors do not typically have. Its 2,500 lumens were enough to tackle the ambient light that leaks in from my kitchen window – ambient light that I still have yet to address, so it proves irksome at times. For a home entertainment projector, I thought it even had decent black level performance. Admittedly, blacks were not true-black, as to be expected, but came pretty close so that at times, I was fooled – more on that later.

This is the projector I want to buy for my mom. Once an LCD TV lover, she’s now fallen in love with the “projector life” after watching 4K films at my house, and, of course, Mom gets the best. As far as sub-$1000 projectors go, this one is at the top of my short list. Now, it’s no 4K projector, but HD looks really, truly excellent. That’s helped along by this Epson’s superb color, which, out of the box, is almost true-to-color.

The Epson Home Cinema 2150, and of course, the 2100 are, as mentioned, home entertainment projectors. That means it’s bright enough to be used in rooms with less than ideal lighting conditions, such as what is seen in most living rooms, media rooms, and bonus rooms. However, it’s not so bright that it can’t be used in a fully darkened home theater – in fact, it’s perfect for it. The projector really hits the sweet spot in terms of brightness.

It’s light weight and portable, with a 10-watt speaker that is capable of producing pretty decent sound. Still, I’ll always tell you to hook your projector up to some speakers – I used our M-Audio AV 40’s. Those are studio monitors for audio mixing and mastering – thanks to my video production background – but they work well for home entertainment purposes. You can get those for around $150 a pair, impressive for the price. That built-in speaker will come in handy for when you want to take the projector outside for a summer movie night, though.

Alright, I feel like if I continue, I’m going to give the whole jig up on the first page. Instead, let’s move on to the highlights of the Home Cinema 2150 (and 2100), and get to the good stuff – you know!  Picture Quality.

The Panasonic PT-MZ880 3LCD SOLID SHINE Laser Projector is an 8,000-lumens with a laser light engine that can natively displa

The new XGIMI Halo+ is brighter, smarter, and easier to install than older Halo   XGIMI has done it yet again! XGIMI has foun