With a $1,499 list price, the HT2550 has two immediate things going for it: It is the first of the new single chip DLPs to ship that uses the newer, smaller, less expensive, and slightly lower “resolution” 4K UHD DLP chip. There have beem several other projectors using that chip announced, and are shipping soon (or by now, depending on when you are reading this). The W1700 seems to be the same projector sold in the EU and other places outside the US.

Back in November, based on preliminary press information, I wrote about the HT2550, in as much detail as I could, with a bit of conjecture.

BenQ was kind enough to provide me with a pre-production HT2550 before CES in January so I could take a “first look” and post in time for the official launch at the Consume Electronics Show, which provided even more info. I took a lot of pictures (although the unit wasn’t calibrated). A few weeks ago, however, I received a full production HT2550, and I have been working with it for about the past two weeks. I’ve already put a whole lot of hours on it, perhaps 70 hours – as the projector I’m reviewing is always on, when I’m writing. My viewing on the BenQ so far – about 50/50, split between sports/HDTV and movies.

A little background on this projector. To me, it is the new 4K UHD equivalent of the old BenQ W1070, a low cost 1080p projector from long ago.  That projector was around for years because of the value, known for great color and a very theater like image. Like that W1070 of old and its decedents, the HT2550 has the color and picture. 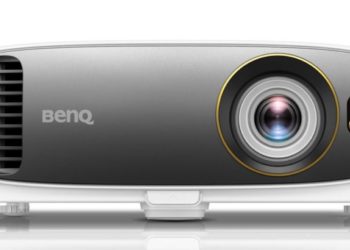 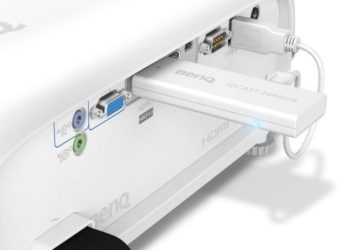 Not bad, not bad at all! (That means I’m rather pleased with it. -art)  The last BenQ HT projector we reviewed, the HT9050, with its LED light engine, and $9K price is a very different beast. But this much smaller projector sure packs a lot of good performance into a projector that sells for 1/6 of the HT9050’s list price. It can’t match the bigger model, which uses the higher resolution 4K UHD chip, or an LED light engine, but the HT2550 definitely has a much better value proposition.

The BenQ HT2550 is a smaller Home Theater/Home Entertainment projector. Oh, it’s a lot larger than those small LED pico and pocket projectors, yet, with its 9.3 pound curved body and smaller than 11” x 14” footprint, it can be portable if needed. For that matter, it can double as a portable business projector. It would be the least expensive 4K UHD projector on the market for business as well as home, at this time.

2,200 lumens is the brightness. The projector has a modest 1.2:1 zoom lens, providing modest placement – speaking of which, this projector lacks lens shift, which is a bit of disappointment, since BenQ pioneered putting at least a small amount of lens shift on some entry level HT projectors (non-4K UHD). Perhaps most important to comment on here is that with 2,200 at its brightest, and 4K HDR capabilities, this projector is best in a home theater, or at least a room you can fully, or near fully darken. Oh, sure, you can go brighter room if your thing is, perhaps, sports, rather than movies. BenQ, as always, provides a very competent remote control, with good range, and nice backlighting.

Since HDR (High Dynamic Range) is supported – a key part of the 4K suite of improvements providing a visibly better picture than 1080p – I’ll be going into detail as to BenQ’s implementation, as there are always compromises. There’s plenty to cover and discuss, and no better way to get started than to provide a list of the key features BenQ touts. Then, in Special Features and the rest of the review, we’ll see how the BenQ HT2550 actually performs, and its strengths and weaknesses.