Fast color wheels have been a real strength of BenQ projectors at almost all price points.  Even the lower cost BenQ W1070 has a color wheel faster than competing Optoma DLP projectors, as well as some of the Viviteks and others.   I am rainbow sensitive, as is a modest portion of the population.

With a 6X wheel, this BenQ W7500 does very well for people like me.  Oh, I can move my head fast, on the right scenes (generally white or near white light objects moving against a dark background), and even when still, once in a while I notice the rainbow artifacts.

When I owned BenQ DLP projectors years ago, I found that their 5X wheel was pretty good, but I still saw more rainbows than I would have liked.  When I have had the ability to work with 6X wheeled projectors, though, rainbows are rare.  I might only notice, 3 or 4 times for a second or less, across an entire movie.

Thus, I’m pleased to report that while no rainbows is the desired, most rainbow sensitive people can probably make peace with themselves and this W7500 BenQ.  Personally, while I’d rather own a projector that has me seeing 0 rainbow effect, I could live with this level, especially if it were the best projector overall.  For perspective, I would not consider owning projector with a 3X wheel.  Period. 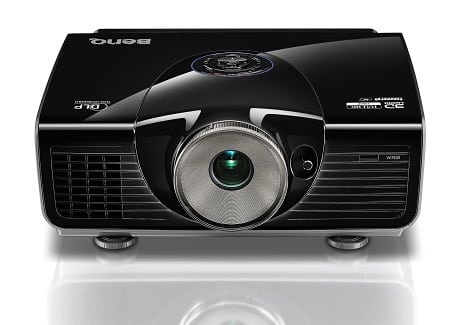 The BenQ’s dynamic iris is respectable.  It hardly has the best range – or it would deliver blacker blacks on the dark scenes, and it could be a touch smoother but no major complaints.   Rarely will you notice iris action except on those types of areas where almost all are visible, such as credits where the text fades in and out.

The iris itself can be heard.  It’s sort of a zzsssts type of sound, fast, soft, multiples.  You can hear it easily near the projector with the sound off, when fast forwarding my blu-ray player, almost makes you think there’s a tiny speaker in there.   If there’s a lot of fast flashy stuff going on.  concert scenes, Bourne movies, it is detectable.  It is fairly high pitched, unlike the Epson 5030UB’s low rumbly iris.  But it should not be of concern.  Rarely will you hear it at all with a sound track playing.

The short version though, is that with the dynamic iris, the BenQ qualifies as reaching my subjective standard for “ultra-high contrast projectors.”  What exactly is that you wonder?

Simply stated, up to a point, better black levels is extremely desirable in a home theater projector, one of the very most important things.  I use the term “ultra-high contrast” for those projectors whose black level performance is good enough, that further improvement, while still very desirable, is likely not as important to most people as better performance in other areas.

I’ll discuss the black level performance of the W7500 in this review’s Picture Quality section.

There is something a bit different about DLP projectors in terms of their picture quality, and it is for that reason that there are folks who are huge fans of that DLP “look and feel”.   That doesn’t seem to be the case for LCD and LCoS projectors.  Oh, if you look at sales, LCD projectors dominate sales in the price range that this BenQ W7500 exists, and if spending above that, but under $10,000, it seems LCoS is the main game with Sony and JVC.   But, while owners of LCD projectors and LCoS projectors chose them for their strengths – such as black level performance, brightnes (in some cases), and how well they calibrate, most of those folks are sold on a particular projector and what it’s capable of.  One doesn’t hear one saying, “I tried the others, but I definitely prefer LCoS (or LCD).

With DLP, though, I hear that all the time.  People who’ve owned one, or two DLP projectors in the past, often try out an Epson or a JVC, but many of them after bringin one of those others home, go back to DLP.  It may be the native sharpness of not having less than perfectly aligned panels, but many say it’s the richness of the image.

I, myself usually put it this way:  DLP projectors seem to be able to produce images that seem to have richer saturated colors in the darker ranges. That, in turn provides more pop to those images (assuming black levels aren’t an issue).  I really like DLP projectors overall, have owned 3 – all old 720p BenQ’s in fact, but since switched to and have purchased back to back JVC projectors (in the $7000-8000 range), although I’m due for a new, 4K projector as soon as possible.

The point of this being that there is something to the picture that the better DLP projectors put on the screen, which is of value, and has developed a loyal following among many enthusiasts.  Let me just add, though, the more you fool around with “fancy image processing” the less, I believe, of the uniqueness of DLP survives.  I’m talking about things like CFI, detail enhancement, and particularly, Brilliant Color.   Folks there are trade-offs for everything.  In other words, if you want that pure DLP look and feel, calibrate the projector, and leave as much “fancy stuff” turned off.

The BenQ W7500’s Picture In Picture feature works – of course, but it suffers from the same issue that affects most.  That is, only one of the two sources can be HDMI.  Since most of us who’ve wired up, rely on HDMI, that means you need another way to get one of the signals to the BenQ – If you want both to be Hi-def, then the other’s going to need to be component video, or an analog PC.  For lower resolution there’s S-video and composite video.

The PIP works as advertised, which is to say, there’s a second limitation.  Only one of the sources is live.  That’s the way BenQ’s been doing it for many years, back to when I owned their flagship $5000+ projector, the PE8720, which of course, back then was 720p.  You can have the main screen or the PIP area be live, but the other will be static.  That is, if you tried to bring in a movie in the inactive window, you’d get the first frame it loads, it would not be a live movie, just a still.

With that in mind, the question becomes:  How many people really care about picture in picture, if one of the images is static.  It should wouldn’t work for me, watching football on the active one, then the other one which I might use to track my fantasy football numbers, would not update.

The ISF a large organization of calibrators (and more), created this standard years ago.  Here’s basically what having an ISF certified projector means to you – this is what I consider key, not ISF’s message, nor necessarily everything that comes into play :

The two ISF modes have appropriately marked buttons on the remote control.